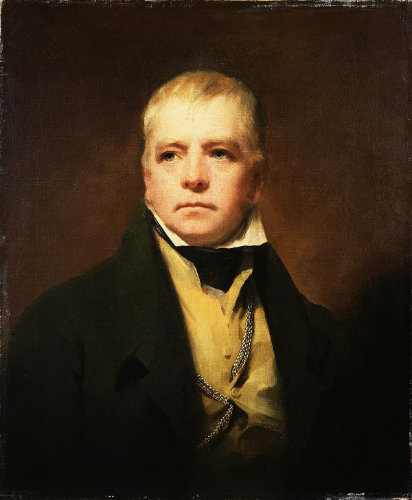 Sir Walter Scott (1771-1832) is regarded as the inventor of the historical novel, he almost single handedly invented Scottish tourism and popularised a romantic and very tartan Scotland.

Scott visited Dumfries-shire often on legal business, his brother Thomas married Elizabeth McCulloch of Ardwall, a house just outside Gatehouse of Fleet, and we know he was in Gatehouse in 1793.  However, he depended on correspondence with a local contact, Joseph Train and his associates, for his Galloway information.

Joseph Train, born in Ayrshire in 1779 and based in Newton Stewart as an exciseman from 1813, had a great interest in collecting local folktales and traditions, and his publication in 1814 of a series of ballad narratives woven from folklore came to the attention to Scott who subsequently asked Train to supply him with further ‘matters of that order’. Train, together with others including the Gatehouse born Captain James Denniston, provided Scott with much folklore and smuggling material which formed the basis of  the novels covered here.

Joseph Train is buried in Kelton churchyard, outside Castle Douglas, near Threave Gardens.

Considered by many to be Scott’s finest novel, Old Mortality forms part of the 1st series of his Tales of My Landlord (1816). Set in southwest Scotland, it deals with the period of the Covenanters, and originated in a suggestion by Joseph Train:

“And what,” resumed Train, “if the story were to be delivered as if from the mouth of Old Mortality?” “Old Mortality!” said Scott, “Who was he?” Mr Train then told him what he could remember of Old Paterson, and, seeing how much his story interested the hearer offered to enquire further of [him]. (Lockhart, Memoirs of Sir Walter Scott, 1852.)

Old Paterson was Robert Paterson (1712-1801), a stonemason who reputedly devoted 40 years of his life to repairing and carving the Covenanters’ gravestones.  Scott, who in his introduction mentions he had actually met Paterson at Dunottar churchyard, accordingly relates the anti-Covenanting campaign of James Graham of Claverhouse (known in Galloway as ‘Bluidy Clavers’) as a collection of stories told by Old Mortality to the character Peter Pattieson.

There is a memorial to Robert Paterson in Balmaclellan, where he lived for some years. It shows him with his pony. His wife Elizabeth Gray, who established a school here, is buried in the churchyard, together with their children. Robert Paterson himself died near Bankend while travelling, and is buried in Caerlaverock churchyard. His memorial there was erected by Scott’s publishers in 1869:  Erected to the memory of Robert Paterson, The Old Mortality of Sir Walter Scott, who was buried here February 1801. 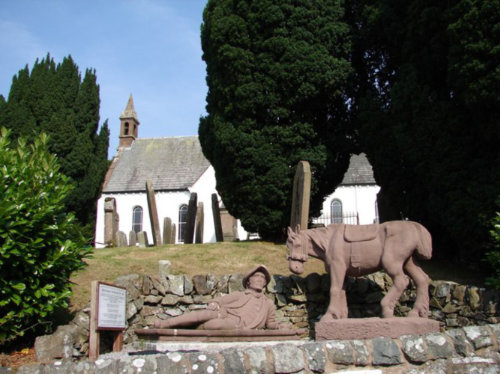 Left: ‘Old Mortality’ and his pony, Balmaclellan. Notable stones in the churchyard include a Covenanter’s stone and a war grave. The Parish Church dates from 1753. © Chris Newman 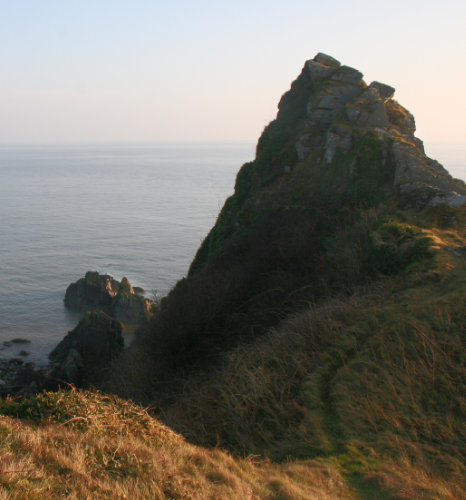 Steep cliffs and rocks at Ravenshall point near Gatehouse.  Dirk Hattericks cave is nearby on this dramatic coast. 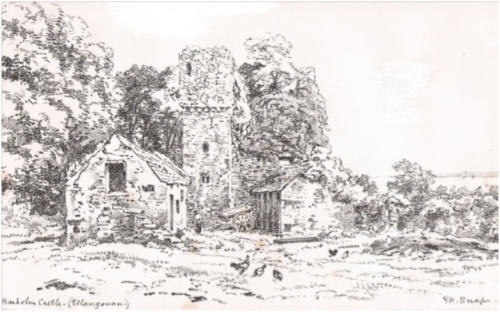 The second of the Waverley novels, and a huge success when it was published in 1815, Guy Mannering is set in the 1760s to 1780s, mostly in Galloway, and tells the story of Harry Bertram who is kidnapped by smugglers after witnessing the murder of a customs officer.  It follows the fortunes of Harry and the struggle over the inheritance of the house Ellangowan, and also describes the lawlessness of the time when smugglers operated along the coast and thieves frequented the country roads.

In the novel, Gatehouse becomes Kippletringan, and Barholm Castle becomes Ellangowan.  This last is a private house restored from the ruinous tower house that it was, but you can take a virtual tour here.  Cassencarie (now Castle Cary, part of a holiday park, becomes Woodbourne. This house contained two celebrated libraries, mentioned in the novel.  Dirk Hatterick’s cave, mentioned in the novel, is on a rocky beach at the Heughs of Barholm, accessed through Ravenshall Wood from a layby on the A75. There are knotted ropes to aid the descent down a very steep bank, so not for the faint hearted.  (Dirk Hatterick, who Guy Mannering meets in the novel, is based on the real-life Captain Yawkins, an Isle of Man smuggler, half Dutch, half Manx, who operated on the Solway coast.)

Redgauntlet (1824), one of the Waverley novels, is a historical novel set in southwest Scotland which describes a fictional plot hatched by the character Redgauntlet to start a third Jacobite rebellion.  It includes “Wandering Willie’s Tale”, a famous short story.

The character Wandering Willie was based on the real life Hugh Prichard, a Welshman. In 1816 he, with his wife Helen, a harpist, and their five children, was travelling from Ireland through Galloway back to their native Caernarvonshire. While spending the night at Twynholm they perished in a very unfortunate accident, and in Twynholm churchyard there are two gravestones, just to the right of the path to the main church entrance.  The larger, with a harp carved at the top, reads:

A Welsh soldier discharged because of blindness that came upon him in Egypt, his wife Helen who was a harper (daughter of a Welsh curate) and five children (one of them an infant at the breast) on their way homeward from Ireland took shelter for the night of 20 April 1816 in a gravel pit near to Old Mill Twynholm and there perished (the bank and roof giving way) Their bodies are here interred.

The smaller, more modern, reads on the reverse:

The Nameless Minstrel was the original of “Wandering Willie”, in Sir Walter Scott’s story Redgauntlet. He is now known to have been Hugh Prichard, of the Parish of Llandegai, Caernarvonshire, North Wales. Erected by the Galloway Association of Glasgow, 20th April 1946.

The harp fell into the hands of Mr Joseph Train, and remained with him until his death. A year or so after that event, when his curiosities were sold and dispersed, it was allowed, being old and worm-eaten, to go to decay, so that now only two fragments remain of that old harp of Wales, which was so intimately connected with Helen’s early and chequered history, which had cheered the Wanderers in exile and poverty, and was treasured to the last as the tuneful and loved companion of the long and homeward march.

Of the Old Mill there is nothing now to be seen, but it is possible to imagine where it would have been and where perhaps the gravel pit was – on the old road just below The Cocoabean the Old Mill Burn is visible, with steep inclines to the left and scattered old stones. 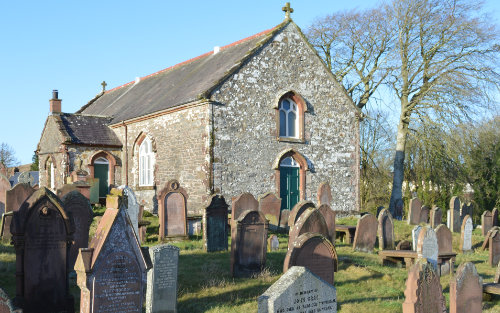 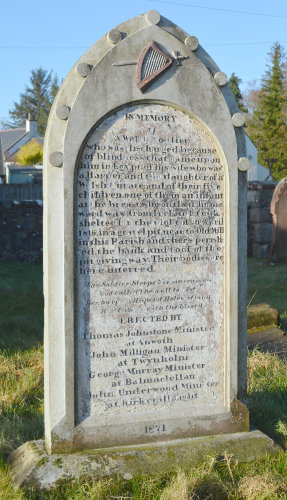 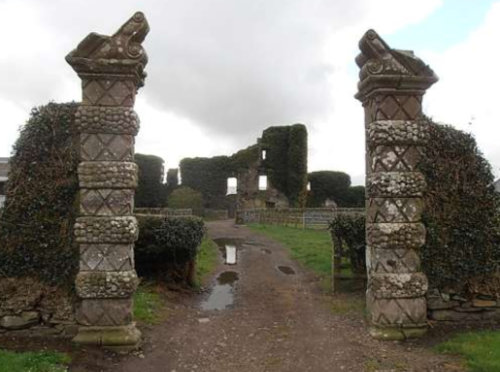 Baldoon Castle.  Little remains except part of one wall and these decorative gateposts.  The site is on private grounds. 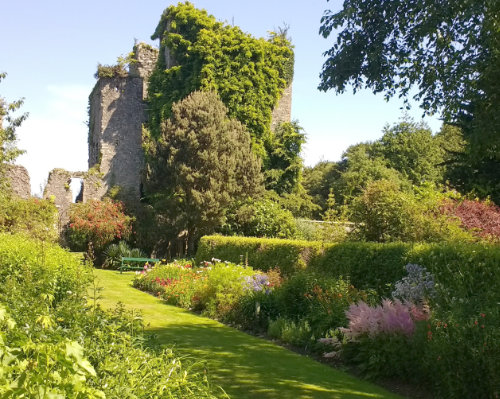 The ruins of Castle Kennedy sit in the grounds of Lochinch Castle and are open to the public.

The Bride of Lammermoor

Another historical novel, published in 1819 and one of the Waverley novels, this is set in the Lammermuir Hills in southeast Scotland, and recounts the love story of Lucy Ashton and Edgar, Master of Ravenswood.  Lucy is forced to marry another man, Francis, Laird of Bucklaw, with tragic consequences.

This story is based on true events – the original of Lucy Ashton was Janet Dalrymple, daughter of the the lawyer Sir James Dalrymple, later 1st Viscount Stair, who in August 1669 was ‘persuaded’ to marry David Dunbar of Baldoon, although she was in love with, and previously secretly betrothed to, Lord Archibald Rutherford.

The wedding was celebrated in Old Luce Kirk. On the wedding night hideous shrieks were heard from the bridal chamber, the door was broken down and Dunbar was found stabbed. Janet was cowering in a corner, covered in blood, and so severely traumatised that she never recovered. She died shortly afterwards on 12 September. What really happened was never discovered. Dunbar survived and remarried; Rutherford never did.

The Dalrymple family rode out the scandal and were elevated to the peerage as Earls of Stair. Their seat is Lochinch Castle, near Stranraer. The grounds contain the older, ruined Castle Kennedy, and its beautiful gardens are open to the public and well worth a visit.

From here you can visit the Mull of Galloway – Scotland’s most southerly point – and many other ancient sites and monuments.

The Heart of Midlothian

The seventh of Scott’s Waverley novels, and published in 1818 as the 2nd series of Tales of My Landlord, the story is set in motion by the Porteous Riots in Edinburgh. The main element of the novel is based on the story [probably sent to Scott by Train) of a certain Helen Walker who had travelled from Edinburgh to London on foot to obtain a royal commutation of the death penalty incurred by her sister, who was unjustly charged with infanticide. Scott put his character Jeanie Deans in the place of Walker, who was a young woman from a family of highly devout Presbyterians.

Helen’s unmarried sister was suspected of the crime of child murder, convicted and sentenced to hang. Her sister could have lied in court to save her but refused to abandon her strong religious principles. Instead she undertook a fourteen day journey to London, barefoot, and petitioned the Duke of Argyll to achieve a pardon.

Helen’s grave is in Irongray Churchyard, six miles northwest of Dumfries. The inscription reads: This stone was erected By the Author of Waverley to the memory of Helen WALKER who died in the year of God 1791. This humble individual practised in real life the virtues with which fiction has invested the imaginary character of JEANIE DEANS. Refusing the slightest departure from veracity even to save the life of a sister she nevertheless shewed her kindness and fortitude in rescuing her from the severity of the law at the expense of personal exertions which time rendered as difficult as the motive was laudable. Respect the grave of poverty when combined with love of truth and dear affection.

‘The exact spot in which she was interred was lately pointed out in Irongray church-yard – a romantic cemetery on the banks of the Cairn – and though, as a country woman said, there was nothing to distinguish it “but a stane ta’en aff the dyke”, the public will be well pleased to hear that Sir Walter Scott intends to erect a suitable monument to her memory. Though subscriptions were tendered, he politely declined all aid, and has already, I believe, employed Mr Burn, architect, to design a monument which, in connection with the novel, will transmit her fame to a distant posterity, and in all probability render the spot so classical, that it will be visited by thousands on thousands in after generations.’ John McDiarmid 1830.

If you do visit, why not take a flower, or some other tribute, in memory of an extraordinary woman. 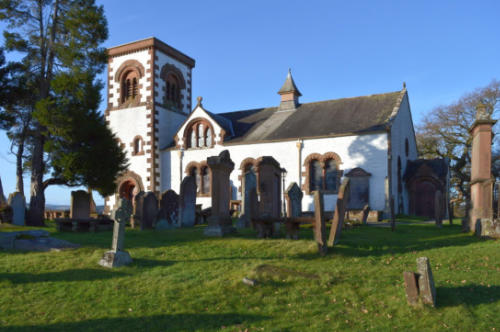 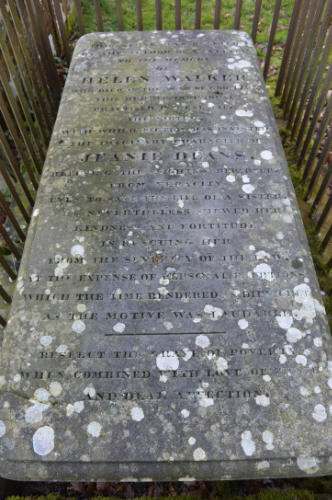