Samuel Rutherford was a celebrated Scottish minister and theologian, who played an important part in the turbulent religious life of seventeenth-century Scotland. He is best known for his letters and the work Lex, Rex: the Law and the Prince.

Rutherford was born in Nisbet in Roxburghshire about 1600. He attended the University of Edinburgh where he became Professor of Latin in 1623 before turning to theology. In 1627 he became Minister of Anwoth, taking up his position in the church which had just been rebuilt. His home was at the nearby Bush o’Bield which was demolished in the 1820s.

In 1636 his nonconformist views attracted the attention of the authorities and he was banished to Aberdeen. However, far from being silenced, during his exile Rutherford kept in touch with his congregation. His letters were widely shared and such was their appeal that within three years of his death they were collected together and published. They are still in print today.

In 1638 Rutherford returned to Anwoth but he was soon appointed Professor of Theology at St Mary’s College at the University of St Andrews and during the English Civil War he was one of the Scottish Ministers who attended the Westminster Assembly of Divines. It was in 1644 that his best known work Lex, Rex was published. An attack on the absolute monarchs of the day who believed that they had a divine right to rule, its thinking was taken up by the framers of the American constitution. In 1647 Rutherford returned to St Andrews where he became Principal of St Mary’s College. 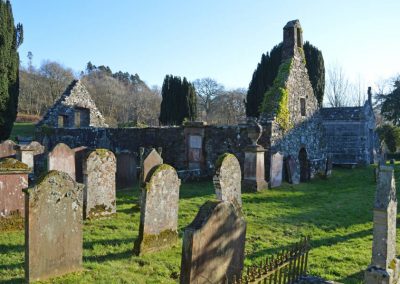 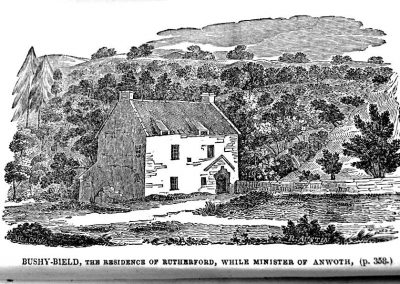 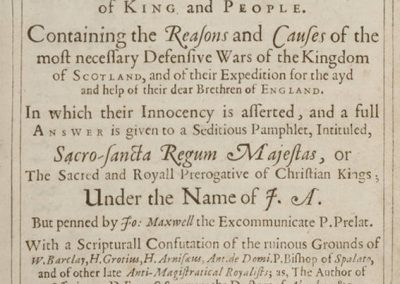 Lex, Rex by Samuel Rutherford. The book, written in English, was published in 1644 with the subtitle “The Law and the Prince” 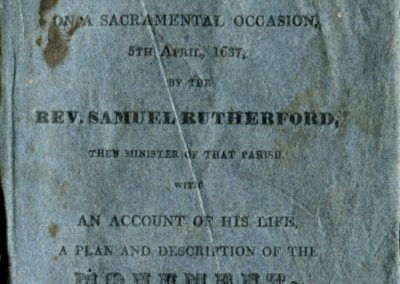 Frontispiece to a reprinted sermon of Samuel Rutherford 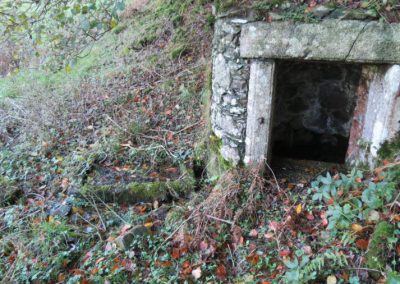 Known as Rutherford’s Well, this is actually a small artificial pool that is fed by a spring coming from the adjacent slope. It is within a circular well-house with a domed roof and a doorway with a lintel and jambs formed from moulded window surrounds re-used from elsewhere.

Anne Ross Cousin’s hymn ‘The Sands of Time are Sinking’ is known as the Anwoth hymn because it recalls the life and writings of Samuel Rutherford and his time at Anwoth. The Rev Val Ott and the choir have researched the hymn. Against the background of scenes of the old kirk at Anwoth and other views of Anwoth the choir sings this lovely hymn accompanied by David Mackay on the organ.