The Thirty-nine Steps is a famous and popular work by Scottish author John Buchan.  One of his early adventure stories, and the first of five featuring his hero Richard Hannay, it is set in the run-up to the First World War and involves an anarchist plot to destabilise Europe, assasinate and European politician, and steal British military secrets.

The title came about while Buchan was recovering from illness at a nursing home in Broadstairs in Kent.  His young daughter had counted the steps leading from the house to the beach.  This location with its all important steps would feature in the fictionalised town at the climax of the novel.

The central part of the novel and the famous pursuit of Hannay across the wild moors of southern Scotland allowed Buchan to use a favourite part of Scotland as his canvass and although actual locations are fictional, real places inspired them, and the story provides a fine excuse for exploring these landscapes.

I fell asleep and woke at Dumfries just in time to bundle out and get into the slow Galloway train. …  We rumbled slowly into a land of little wooded glens and then to a great wide moorland place, gleaming with lochs, with high blue hills showing northwards. … I got out at the next station, a little place whose name I scarcely noted, set right in the heart of a bog.

The description could be Gatehouse Station, but it could also describe Mossdale (New Galloway Station) very well.

An old station-master was digging in his garden, and with his spade over his shoulder sauntered to the train, took charge of a parcel, and went back to his potatoes. A child of ten received my ticket, and I emerged on a white road that straggled over the brown moor.

Hannay spent the night in a shepherd’s cottage and sets out the next morning to a different station with the intention of doubling back to put his pursuers of his scent.

Over a long ridge of moorland I took my road, skirting the side of a high hill which the herd had called Cairnsmore of Fleet. Nesting curlews and plovers were crying everywhere, and the links of green pasture by the streams were dotted with young lambs. All the slackness of the past months was slipping from my bones, and I stepped out like a four-year-old. By-and-by I came to a swell of moorland which dipped to the vale of a little river, and a mile away in the heather I saw the smoke of a train.

The station, when I reached it, proved to be ideal for my purpose. The moor surged up around it and left room only for the single line, the slender siding, a waiting-room, an office, the station-master’s cottage, and a tiny yard of gooseberries and sweet-william. There seemed no road to it from anywhere, and to increase the desolation the waves of a tarn lapped on their grey granite beach half a mile away. I waited in the deep heather till I saw the smoke of an east-going train on the horizon. Then I approached the tiny booking-office and took a ticket for Dumfries.

It is not really possible to match up Buchan’s locations with any great certaintly.  As an author well acquainted with an area he knows well and loves he has produced an amalgamation of remembered places to create the fictional places of his story.

The remains of the station at Loch Skerrow.  © Copyright Mary and Angus Hogg

You can retrace Richard Hannay’s route beneath the mass of Cairnsmore of Fleet, walking along the line of the former railway track between Gatehouse Station and Mossdale (New Galloway) Station.  The path has been recently upgraded and is quite level being a former railway line.  Only one section is not on the former track and that is where the army sadly blew up for practice, the Little Water of Fleet viaduct.  Apart from the peace and quiet, key things to look out for on the walk are crossing the 19-arch Big Water of Fleet viaduct, and Loch Skerrow, passing through the remains of the former halt.  It is a linear walk and if arriving by car it is possible to park and do the walk from either end.

For a longer tour, the map included in the 1947 edition of the book suggest the route taken by Hannay as he criss-crossed the region.  The back roads over the hills as far as the Talla Reservoir and back down to Moffat is a long and winding drive through dramatic moorland scenery. 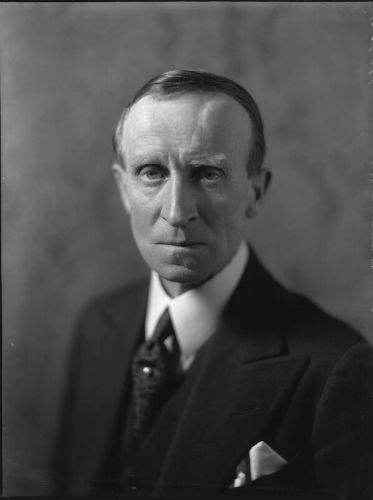 One of Scotland’s greatest novelists, John Buchan was born in Perth in 1875, the son of a Free Church of Scotland minister. He was brought up in Kirkcaldy, Fife, and spent many summer holidays with his maternal grandparents in Broughton in the Scottish Borders. There he developed a love for walking and for the local scenery and wildlife, which are often featured in his novels. He studied Classics and Philosophy for three years at the University of Glasgow before winning a scholarship to Brasenose College, Oxford.

At Oxford, Buchan won the Stanhope prize for History and the Newdigate prize for Poetry, became President of the Oxford Union, published his first novel, Sir Quixote of the Moors, and gained a first class degree in Literae Humaniores. He entered into a career in diplomacy and government, becoming in 1901 the private secretary to the High Commissioner for Southern Africa. On his return to London he entered into a partnership in Thomas Nelson & Son publishers. He was also called to the Bar but never practised.

His novels were very popular, notably Prester John (1910) and The Thirty-Nine Steps, serialised in Blackwood’s Magazine in 1914. With the outbreak of the First World War Buchan, pronounced medically unfit for combat service, went to write for the British War Propaganda Bureau, publishing a monthly magazine detailing the history of the war, and worked as a correspondent in France for The Times. From June 1916 he worked for General Haig at General HQ on the Western Front, drafting communiqués for the War and Foreign Offices and became 2nd Lieutenant in the Intelligence Corps, later promoted to temporary Lieutenant-Colonel. In 1917, Buchan was appointed as the Director of Information under Lord Beaverbrook and was briefly Director of Intelligence.

After the war, Buchan continued to move on the public stage. He was elected Unionist MP for the Scottish Universities (1927-1935), and appointed Lord High Commissioner of the Church of Scotland (1933-1934). Created the first Baron Tweedsmuir of Elsfield in 1935, he became Governor of Canada, a position he held until his death in 1940. It is for his writing, however, that he is best remembered.