A gentleman’s position in society was measured by his lands, farms, transport, and manufacturing ventures and schemes to benefit his tenants. It was however his house, parks and pleasure grounds which were the prime badge of status. The stone walls surrounding and dividing the grounds of Cally were part of the grand design and have become an important feature of our landscape today. The walls are still a very visible presence when approaching Gatehouse and many have been restored as part of a community project called Cally Boundaries.

In 1792 Robert Heron described Cally House as ‘a large modern building’ surrounded by grounds that matched the ‘dignity and fortune of the proprietor’.  A fashionable house and garden that lay at the heart of James Murray’s social identity included a large deer-park ‘inclosed within high and well built walls and plentifully stocked with fallow-deer’.

The perimeter policy and deer walls are up to 2 metres high and were a deliberate statement of possession, making the parks and pleasure grounds private as well as preventing the deer from straying.

A taste for the gothic style included the desire to create the illusion of an ancient medieval park stocked with wild game.  Regarded as survivors of Scottish native wild oxen, the white cattle of Cadzow were particularly sought after and James Murray purchased some stock from the Duke of Hamilton.

Pure white except for black muzzles, ears, hoofs, and tips of the horns, they roamed through the wooded park with herds of fallow deer to complete an idyllic scene.

James Ramsay, landscape gardener, is credited for adding new elements including a gothic ‘Temple’, built in 1779 from stone quarried nearby. Located on rising ground immediately to the east of the road linking Girthon and Gatehouse, the square tower with a castellated top was designed to impress passing traffic. The pointed arch openings faced the road below while the false openings to the side were designed to provide a pleasing feature viewed from the distant mansion.

The ‘Temple’ was used as lodgings for William Todd for ten years while he was in charge of James Murray’s drove cattle.  However, in 1792 he left his employment at Cally for the lure of the high wages that could be earned at the newly constructed cotton mills in Gatehouse of Fleet.

A point of view

It was James Ramsay, a landscape gardener of repute, who provided designs to alter and extend the parkland at Cally.  His work was similar to ‘Capability’ Brown’s ‘landscape’ style where the entire policy is enclosed either within a belt of woodland or lines of trees adjacent to the river, smooth contours providing open rolling parkland with scattered groves and clumps of trees, a flat body of water and unsightly features masked or planted over with woodland.

To provide uninterrupted views across the rolling landscape the field boundaries at Cally were hidden by constructing ‘sunk dykes’.

The most commonly used sunk dyke was the ‘haha’ where a ditch is excavated with one face retained by a drystone dyke often topped with a timber paling-fence.  The name appears to have originated from the ‘ha-ha!’ exclaimed when someone unwittingly discovered the hidden boundary.

Another solution was the ‘double sunk dyke’ where a drystone wall was built in the centre of a broad ditch.  From a short distance away the ground level appears to continue undisturbed and to aid the effect the wall was topped with grass turf. 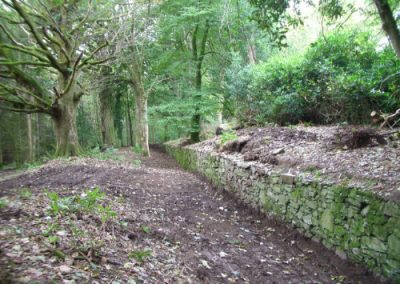 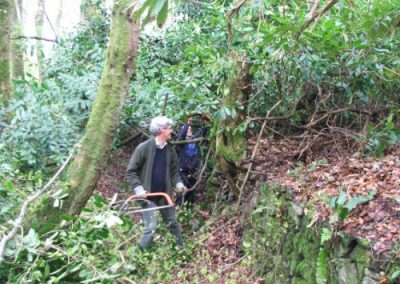 The Haha before restoration. 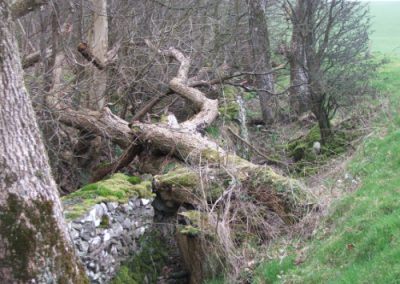 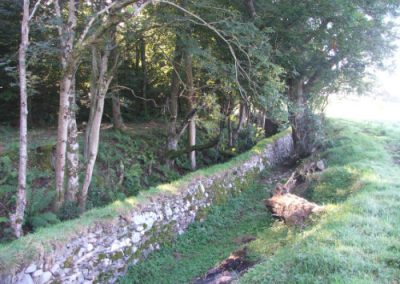 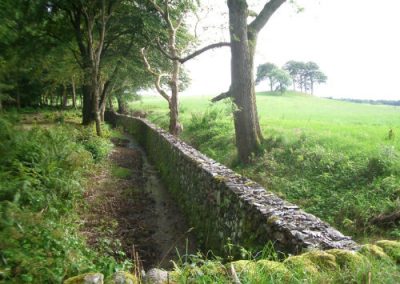 Sunken Dyke complete – only the turf top to add. 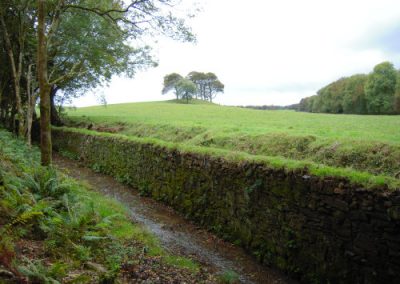 The top of the dyke is finished with turf rather than the normal cope stones.

When J C Loudon published the results of his 1831 gardening tour he criticised the grounds at Cally as ‘not all in that high and finished taste that we expect to find them’. The inward focus of the ‘landscape’ style had become unfashionable and Loudon’s disappointment in the grounds seems to be a reflection of the new taste for distant views of wilderness to be incorporated into the scene.  He suggested that the grounds would be greatly improved by removing some of the woodland to open up views beyond the river ‘to the mountains and their rocky summits on the one hand, and the sea on the other’.

Gatehouse from an engraving of a painting by D O Hill published in “The Land of Burns” 1840.

In 1779 James Murray of Broughton and Cally built a fine two storey neo-gothic stone tower. Known as the Temple it once looked out across the elegantly laid out parkland of Cally House and was designed to impress visitors. In its heyday it would have been a striking feature in the landscape when viewed from the house itself.  Although roofless now, it was lived in during the 1780s by William Todd who looked after the Murray’s drove cattle.

In 1933 Cally House and the surrounding parkland along with Cally Mains Farm were sold to the Forestry Commission.  Cally House  became a hotel.  Cally Mains later became a private farm.  Part of the land sold to the Forestry Commission became a forest nursery, employing a significant number of local people.  Between 1936 and 1939 the woodlands and much of the parkland was replanted, largely with deciduous species. Over time, many features of the Designed Landscape of Cally, became lost within the woods. 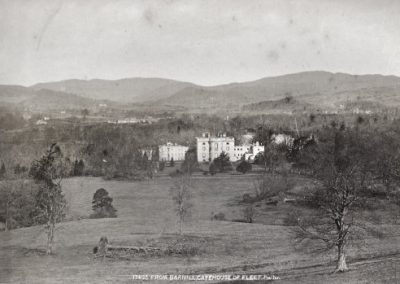 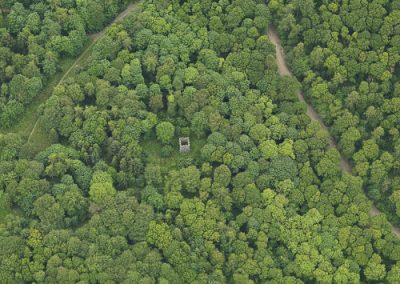 temple from the air 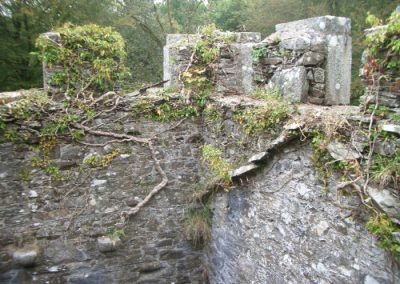 Interior with ivy to be removed 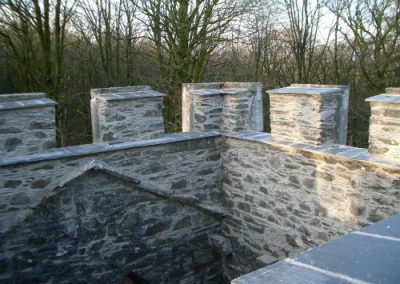 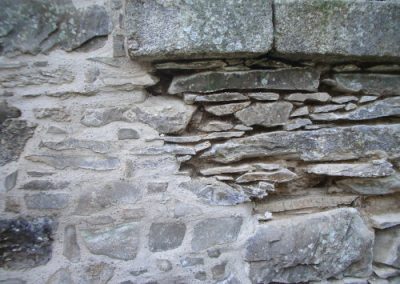 Raked out mortar and new pointing

In 1816 Lady Anne Bingham, daughter of the Second Earl Lucan married Alexander Murray of Broughton and the couple set up home at Cally. A few years later Lady Anne established a school for girls beside the Cally Lake, which became known as Lady Anne Murray’s Charity School.  Girls aged between three and fourteen from Gatehouse and the surrounding neighbourhood attended the school.

In 1816 Lady Anne Bingham, daughter of the Second Earl Lucan married Alexander Murray of Broughton and the couple set up home at Cally. A few years later Lady Anne established a school for girls beside the Cally Lake, which became known as Lady Anne Murray’s Charity School.  Girls aged between three and fourteen from Gatehouse and the surrounding neighbourhood attended the school.

Joseph Barrett, master of the Cally School for boys married Anne Titley the teacher at the Cally girls’ school in 1859. It is likely that the two schools were amalgamated after this. Thomas Faed, the celebrated Victorian artist, was born and raised in Gatehouse of Fleet. His works were often based on local scenes and many of the features of the room in the above painting, such as the leaded window and the panelled dado, are similar to those in the old school. The painting is titled “The Visit of the Patron and Patroness to the Village School”, 1851, Thomas Faed R.A., and is in the collection of Dundee Art Galleries and Museums (Dundee City Council).

In 1933 Cally House and the surrounding grounds were purchased by Forestry Commission Scotland who used the building as a store. Over the years the old school was hidden by vegetation and gradually became unsafe. The local community, however, was determined to keep this historic building and with the support of Forestry Commission Scotland funding was secured to tell the story of Cally Old School and make it safe for the future.

The Cally Boundaries was a community-led project to reveal and restore drystone dykes in and around the designed landscape of Cally.  Volunteers surveyed the condition of 17km of drystone dyke and cleared undergrowth to reveal the dykes for the restoration to be undertaken by professional dykers.  Dyke building training days allowed volunteers to learn rural skills while restoring historical features which are important to the setting of Gatehouse of Fleet.

The Cally boundaries project restored three types of drystone dyke:  Perimeter policy and deer dykes are usually over 1.6m above ground level and are of double construction with granite boulders as cope stones and prominent through stones.  Archives show that many of these dykes were built in the early 1800s by William Black and John McGill.

The haha is a field boundary which does not interrupt views of open countryside.  A drystone dyke retains one side of a ditch while the other side has a gentle slope. The dyke is usually 1.4m in height from the base of the ditch and lacks cope stones.  A low fence erected on top of the dyke helps to increase its effective height.

Similar in purpose to the haha, the double sunk dyke hides the boundary wall along the centre line of a ditch.  At Cally the dyke is over 1.6m high, a small burn runs along the bottom of the ditch, and instead of a stone cope it is topped with turf.  Archives show that this dyke was built in the early 1800s by James Conlin and Edward Murphy.